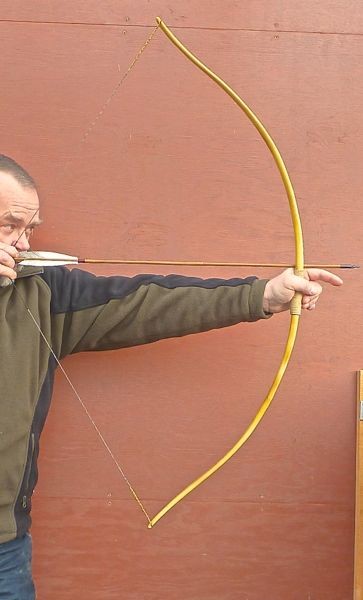 My friend Chris asked me building a horse bow for him, specs should be:

Being no horse rider and no expert in horses I see some upcoming questions.
my thoughts are:
1.) Bow has to be short, but long enough for 27″ draw, I think about 54″ with bending handle to get a smooth draw without stack
2.) It should be robust to handle tough using on the horse, I think osage or elm could be possible woods
3.) Christian didn’t want a recurve for some reason, but I think flipped tips could be a good compromise
4.) Bow should not have spiky tips to prevent peaking the horse (and get a sudden good speed …. )
5.) With  a relative short bow of 54″, I will go for a symmetrical with wide limbs (have no good reason why, but think so)

this will be no replica bow, just a  from horseback shootable bow.
He requested a fulldraw (27″), he’s not used to shoot short draw bows
This will be an unbacked bow, no sinew
I really will do rounded tips (which will be the first time for me – I like the spiky slim ones)

I picked up an osage stave and chased a ring. Unfotunately it had a huge propeller twist, nearly 90°.
Stave is 56″ long, clean – no knots, nice rings Next step will be: layout limbs (devide in sections) and handle (marking upper limb, handle should be narrowed for more comfort) some work with the drawknife

problems: dogleg, not matching limbs, twist, sabre in one limb, … now the steaming part, here is my absolute primitive apparatus While steaming it’s time enough to make a bending jig here is the jig in the vice, I tried to untwist the stave and make some corrections a simple slot was made from an old lisence board, wedges holding the stave in line, the green line on the bow marked the roughing out

she came out quite good, one limb still shows some twist and tends to the right here is the setup to correct the problems from above two clamps holding the stave in line, one clamp is on the tip end and is like a lever to give some momentum (rubber band) for untwisting heating with the heat gun between the clamps

here she is after all the corrections, sill 56″ long after some tillering and sanding …. Handle is 1″ above and 3″ under the geometric middle.
I changed my mind (symmetrical bow), because of shooting from horseback (lower limb is shorter, so easier maneuverable)